Timotheos is compounded from two common elements of Greek compound names, time (honour) and theos (god).  LGPN has 605 instances so far, with Syria and Egypt still to come; first is a young man acclaimed, as so many young men were, as ‘handsome’ on an Attic vase c. 520 BCE.  The name was very exportable: 320 bearers come from Anatolia, some of them citizens of the Greek colonies, others probably Anatolians by origin but bearing Greek names. A feminine Timothea is much rarer (just 23 instances).  Three Timotheoi made enough of a mark to be commemorated in the Oxford Classical Dictionary: an Athenian general of the early 4th c. whose career, financially and politically, was as up and down as Athenian generals’ careers tended to be; a sculptor of the same period who worked on the original Mausoleum built for Mausolos at Halicarnassus; and, a little earlier, an enfant terrible from Miletus, a lyre-player who brought the free-form ‘new music’ to Athens.  A quite different musical Timotheos was the flautist who played to Alexander the Great and

‘to his breathing flute

Could swell the soul to rage, or kindle soft desire’

as Dryden described in ‘Alexander’s Feast or the Power of Music’; these two musical Timotheoi were, however, already confused in antiquity (whence Dryden gives his Timotheos both instruments).

The Bibliotheca Hagiographica Graeca offers no fewer than eight Timotheoi, most of them martyrs, most of them predictably from Anatolia, and even a Timothea.  The name’s linking of the ideas of ‘honouring’ and ‘God’,  probably not very active for pagans, may have made it attractive to Christians.  The crucial figure among all these Timotheoi for the name’s later reception was Paul’s companion, son of a Greek father and Jewish mother, first introduced at Acts 16.1-3, and actual addressee of two letters of Paul.  According to a short life of him, he became the first bishop of Ephesus and was lynched for disrupting (common motif in accounts of martyrdom) what to my godless taste sounds like a rather jolly pagan festival.

E.G. Withycombe’s admirable Oxford Dictionary of English Christian Names tells us that the name  only came to England after the Reformation.  One would need to know more than I do about the cult, or rather apparent lack of cult, of St Timothy to understand that late start, paradoxical given Timothy’s prominent position in the New Testament.  The name became popular in England and Wales in the mid 20th c., but from a high point in the sixties (rising to 23rd most popular male name in the charts), has declined steeply again.  Various websites will tell one that Tadhgh (pronounced Tige, tiger without the final r) ‘is the Irish for Timothy’, a naive formulation of the point that Timothy has been popular as an English equivalent for that Gaelic name.  But even in Eire it seems to be losing popularity.  Bearers of the name can pride themselves now on a certain exclusivity. 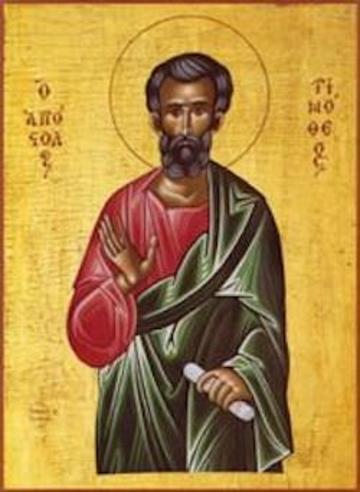