Alexander is one of the first names in Greek history. Alexandros is an alternative name in Homer for the Trojan prince whom later tradition calls Paris, whose award of the prize to the goddess of love won him the Greek queen Helen and started the Trojan War. (Alexander is the Latin form). The myth is a fine one, but Alexandros may have been a real person. The diplomatic correspondence of the Hittite kings preserves a reference to one King Alaksandu of Wilusa, which is almost certainly Ilion, i.e. Troy. He signed a treaty with the Hittite king Muwatalli II in about 1280 BCE.

As for historical times, the volumes of the Lexicon of Greek Personal Names published so far list 3116 bearers of the name Alexandros; the eventual total will very likely exceed 4000, and put it in the top ten names. But probably fewer than 50 of all those Alexanders were born before 300 BC.  Initially the name was mainly associated with Macedon and with its kings. Alexander I of Macedon was allowed to compete in the Olympic Games of (probably) 504 BCE as an honorary Greek. In fact the name is one of a small number of pieces of evidence for the ‘Greekness’ of the Macedonians, or at least of their names. It is Greek in form (meaning ‘protector of men’), like most other Macedonian names: Amyntas (‘defender’), Perdiccas (‘partridge’), Philippos (‘lover of horses’), Ptolemy (‘Ptolemaios’, ‘warlike’).  What raised it from a predominantly Macedonian name to one of the most popular wherever Greek was spoken was, of course, the extraordinary career of Alexander III of Macedon (356-323 BCE), he who conquered the Persian empire and thus spread Greek language and culture throughout the Middle East and as far as Afghanistan and Pakistan. We know him as Alexander ‘the Great’, though that epithet is not attested before a play of Plautus, around 200 BCE.

Most of the peoples Alexander conquered seem to have made the best of a bad job by adopting him as one of their own. The Egyptians called him Pharaoh, and the city of Alexandria which he founded has immortalised his name; modern Greeks insist that, though Macedonian, he is one of theirs; and, despite some caustic comments in I Maccabees, some Jews claimed that he had visited Jerusalem and paid homage to the High Priest. Alexandros accordingly achieved some popularity as a name among Jews too, and as Alexander remains popular today as a Jewish name, both surname and forename.

The legend of Alexander the Great spread across Europe and the Middle East in the Middle Ages. In Persian he is Iskandar or Sikandar, and the name is still sometimes borne by modern Iranians (and Indians), as is that of his Persian opponent, Daryush. Women of Baghdad may still threaten their naughty children that the bogeyman Iskandar will ‘get them’. In the many romances about him, in every language of Europe and the Middle East, he represents the pinnacle of human achievement, while falling short of Christ or The Prophet.

It is hard to think of any other name, other than biblical or saints’ names, that has achieved such popularity throughout Europe: the romances must be largely responsible, as well as his general fame.  In the Middle Ages the name was borne by kings of Scotland (where via Gaelic it also became Alastair), later by Tsars of Russia.  It has metamorphosed into an English surname, Saunders or Sanders: I know a scholar named Saunders who has a son Alexander (a kind of dittography) and a daughter named after Alexander’s first wife, the Bactrian princess Roxane. And let us not forget that, when we first meet Winnie-the-Pooh, he is living ‘in a forest all by himself under the name of Sanders’. He too is Alexander.

Richard Stoneman, author of many books on the Alexander romance and father of an Alexander. 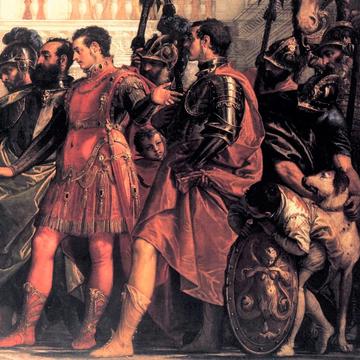