Jason, the man who led the expedition of the Argonauts and brought the Golden Fleece back to Greece from Colchis, is an exception to the general rule that the names of mythical heroes were not borne by historical persons.  And this despite the supremely shabby figure that he cuts in Euripides’ Medea, where he abandons his first wife Medea in favour of a strategic marriage with a ruler’s daughter and expects Medea to be grateful!  The Greek form of the name is Iāsōn (Greek had no J), three syllables, or in epic verse Iēsōn, and the Lexicon of Greek Personal Names offers to date 785 Iasons.  The only hint at the normal avoidance of mythical names is that the first Iasons only appear at the end of the 5th c.:  Iason tyrant of Pherai in Thessaly (not far from the home of the mythical Jason) was born c. 430, but may have been preceded by an Athenian attested in 405 BCE.  The distribution of the name is rather striking: modest popularity in most regions, but huge peaks in Greek North Africa (Cyrene and regions west) and in Caria and Lycia in South West Turkey.  The Argonaut Jason had supposedly stopped off in the vicinity of Cyrene and claimed the region for Greek settlement on the way back from Colchis, even though that settlement only occurred at least half a millennium after the ‘Age of Heroes’ to which Jason belonged.  That myth might help to explain the name’s popularity in north Africa, but not in South West Turkey.  A name that acquires great popularity outside Greece proper is often an ‘assonance name’: the Greek name nearest in sound to a name from the native name stock of the region in question.  But we know too little of names in the Carian and Lycian languages to identify a candidate or candidates for the original.

An instance of just that phenomenon is known from a different region.  Iason became a fairly common name among Jews who came into contact with Greek speakers: Iason of Thessalonike (Acts 17.5), perhaps identical with Paul’s ‘kinsman’ (Romans 16.21), is an  example.  One rare and precious testimony makes the process explicit: the Jewish historian Josephus tells us (Antiquities 12. 239) that a High Priest at Jerusalem in the second century BCE who was friendly to Greek culture changed his name from ‘Iesos’ (the name familiar to us as Jesus) to Iason.  His original Hebrew name was presumably Yeshua or Yehoshua: ‘Iesos’ is itself a partial Hellenisation of the Semitic name.  Iesos and Iason show alternative ways of ‘translating’ a non-Greek name for use in a Greek environment: in Iesos the Semitic name has acquired a Greek ending, but no more, whereas Iason more drastically appropriates an existing Greek name.

The modern history of the name is less than clear.  That it first flourished in the USA, and gained hugely in popularity in the 20th c, is certain: census records for the 1880s made it 408th in popularity, for 1990 24th.  It was completely absent even from the second edition (1884) of Yonge’s History of Christian Names (admittedly a work with a European bias).  The admirable E.G. Withycombe claims that it has been used occasionally since the 17th c. and derives it from the Iason of Thessalonike mentioned above (who is in fact a saint in the Catholic and Orthodox churches).  Nothing to do with the Greek hero, she insists.  But one may suspect that five Jason and the Argonauts films may have helped to keep it popular in recent times. 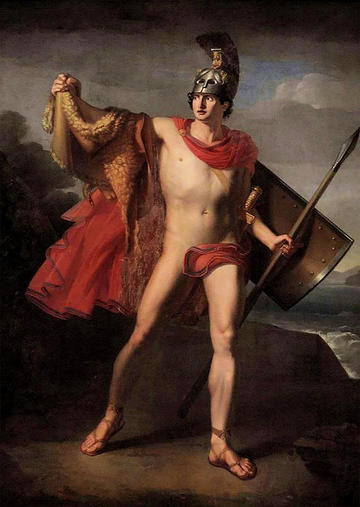