I start, of course, with the most famous of all Helens, the one we moderns think of as ‘Helen of Troy’.  In so doing we associate her with the town she brought to ruin, not the one she came from; but so far instances of the ‘of Troy’ have not been traced back beyond 1577.  According to Greek myth it was in Sparta that she emerged from the egg which her mother Leda laid when impregnated by Zeus in the form of a swan.  In Sparta she was honoured as a goddess with her husband Menelaus; their joint sanctuary, the Menelaion, has been excavated and has yielded votive offerings naming both of them.  These are strange traditions that have led to much speculation about her ‘original nature’ which I thankfully bypass here.  In Homer she is radiant and inscrutable.  Later poets tend to be much less kind to her: hele- in Greek can mean ‘kill, destroy’, and so the chorus in Aeschylus’ Agamemnon (689-690) pun on her name to make her ‘ship-destroyer, man-destroyer, city-destroyer’.  One counter-voice was the sixth century poet Stesichorus, who was supposedly struck blind for speaking ill of her and so composed history’s first palinode (that is the word used): ‘‘this story is not true; you did not go in the beaked ships; nor did you come to the towers of Troy”.  Those lines he certainly wrote: his actual motive?  - another Helen mystery.  Euripides in his Helen whimsically took up the invention and told how the war at Troy had been fought over a mere phantom of Helen; the actual woman was hidden all the time in Egypt.

But back to the name Helen (which in Greek is in fact Helenē or Helenā).  The Lexicon of Greek Personal Names has 114 Helens so far, with Syria and Egypt still to come; and there are a startling 199 in Rome.  (Sparta has none; nor does the re-founded Troy.)  Helens appear on a small scale in the 2nd c. BC but become abundant only in the Christian era.  One might be tempted to ascribe the complete absence of historical Helens until so late to the ‘Adolf syndrome’, the power of a hated bearer to kill a name dead.  But the phenomenon is more general: names of heroes of myth (and a fortiori of gods) were all avoided until quite a late date, when ‘heritage names’ became popular.  Onomastically the crucial Helen is one Flavia Julia Helene, from Drepanon, a small town about 30 miles south east of modern Istanbul.  Helena was not a high status name in antiquity (the vast majority of those Helens at Rome were slaves or freedwomen) and Flavia Julia Helene was of lowly origin: one source speaks of her as a stabularia, inn-keeper (barmaid?).  But as mother of the first Christian emperor Constantine (born c. 272) her fame was assured.  By the end of the 4th c. she had been credited with finding a fragment of the ‘True Cross’ of Jesus in Jerusalem, a story commemorated in the Old English poet Cynewulf’s Elene (9th c.?).  Geoffrey of Monmouth (d. 1154/5) in De Gestis Britonum boldly made her a daughter of king Coel of Colchester, aka Old King Cole.   Her name spread and morphed in ways far too complicated for the present writer to trace with competence: Charlotte Mary Yonge lists Elaine, Ellen, Eleanor, Elinor, Nell, and Leonora (and a few others now extinct) as all related in English naming alone; there are forms all over Europe.  .  . And, as is the way with names, we recognise and use all these names without sparing a thought either for Helen of Sparta or of Drepanon.

Robert Parker, who succeeded ELAINE Matthews as Director of the Lexicon of Greek Personal Names project. 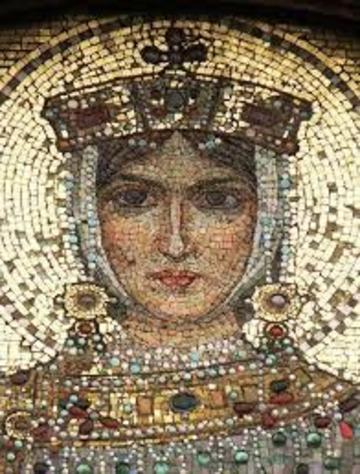