The most popular male name for a Greek, to judge from the published volumes of LGPN, is Dionysios (5019 attestations).  He is quite closely pursued by Apollonios (4722); Demetrios (3629) lags a little behind.  All these are so-called theophoric names, those based on a god’s name though not identical with it.  Mortals did not bear gods’ names unadjusted before the 1st c BCE (if we set aside a few problematic instances of Artemis), even if Dionysios differs from the god Dionysos only by a single letter.  Like other gods’ names, Dionysos also generated a good number of compounds: the very popular ‘Gift of Dionysos’ (Dionysodotos or Dionysodoros), the moderately popular ‘Dionysos-glory’ (Dionysokles), the understandably rare ‘Dionysos-horse’ (Dionysippos), and others.  Like many other theophoric names it surged forwards after a comparatively late start (just 5 instances before 500 BCE, 53 before 400).  Its very popularity means paradoxically that there is less to be said about it than about obscurer names: little regional variation, for instance, though it reaches Sparta only late (Spartan hostility to the god of wine?).  No fewer than sixteen Dionysioi have achieved entries in the Oxford Classical Dictionary (and eight in the Oxford Dictionary of the Christian Church).  One who made an involuntary contribution to European culture was Dionysios I, tyrant of Syracuse in Sicily (born c. 430): not through his much-ridiculed plays, but because the poet Philoxenos, a rival for the affections of the tyrant’s mistress Galatea, caricatured him (or so the story goes) under the figure of the Sicilian monster Cyclops: whence Handel’s Acis and Galatea.

Of the various martyred Dionysioi, the one crucial for the name’s later history is one of the ‘seven bishops’ sent to preach in Gaul in 250 CE (Gregory of Tours, History of the Franks, 1. 30).  Dionysius became bishop of Paris, and was one of two of the seven to suffer martyrdom; the tradition that he was beheaded and became a ‘kephalophoros’, carrier of his own head after execution, begins later.  He had, for obvious chronological reasons, nothing to do with Dionysius the Areopagite whom Paul converted (Acts 17.34) and who came to be credited with works of mystical theology written centuries later.  None the less, the identification was made, apparently by Hilduin, abbot of St Denys, in the early 9th c. CE, and the conversion of France was thereby brought back into apostolic times; when Peter Abelard rashly entered into controversy over which of several Dionysioi was which, he was driven from his monastery.  Even before Hilduin’s intervention, the fortune of Dionysius, now St Denys (how –io- became –e- is surely known, but not by me), was already on the rise; he was to become patron saint of France, and the abbey of St Denys the burial place of French kings.  From France his cult came flooding into England; reference books speak of forty-one ancient churches dedicated to him.  With the cult came the name in its French form (first in the 12th c., apparently).  It lost popularity in the 19th c.: C.M. Yonge in 1884 wrote that ‘to judge by the number of the surnames, Dennison, Denison, and Tennyson or Tenison, it would seem to have been more common in England than at present’, but has bounced back since.  I would like to believe her further claim that the Sicilians took St Dionigi as their patron ‘because of a certain confusion in their minds’ between the saint and their own tyrant Dionysios I, mentioned above; but this may be a slander on their historical sense. 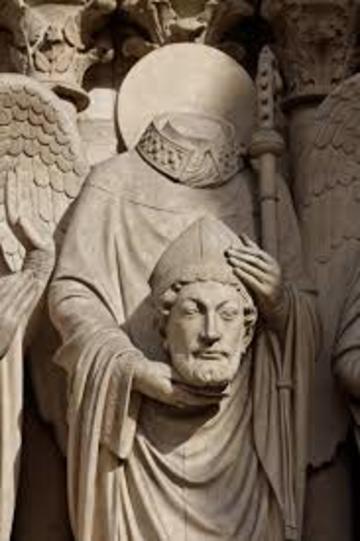