Before becoming a personal name Corinna (in Greek of course Korinna) was the diminutive form of the common noun kore (‘girl᾽, ‘maiden’). It derives from the root *korw- + the suffix  -inna which is of uncertain origin (perhaps pre-Greek) but is clearly informal/affectionate. It is a surprisingly rare personal name in both the Greek and Roman worlds.  Epigraphy gives us only one sure Greek attestation, a Boeotian epitaph from Tanagra dating to the 4th/3th century BCE (without the double letter: Korina), alongside a handful of variants (3x Korinnō, 1x Korinnis and the specifically Boeotian form Korilla; a masculine form Korinnos is attested for Locrian Opous). The database of Latin inscriptions by Clauss-Slaby records only 10 attestations, all from the 1st CE (equally divided among free women, freed women and slaves). Literary attestations are equally meagre: if we exclude the Boeotian poetess Corinna (on whom more below) we have only three other Corinnas, all fictional or bearing a pseudonym: two courtesans (one in Lucian’s Dialogue of courtesans and one in an epigram of the Palatine Anthology), and the poet Ovid’s mistress (for whom the name will be a cover if she existed at all).

The most famous Corinna of the ancient world was a lyric poetess from Tanagra.  Supernumerary tenth Muse of ancient lyric (the only other female poet of the canon being Sappho), Corinna was allegedly a contemporary of Pindar (5th c. CE) whom she defeated in competition five times. Pausanias ascribed her victory both to the use of her vernacular dialect (Boeotian) and to her extraordinary beauty.  But modern scholarship has doubted the picturesque story, and even suggested that she actually belongs two centuries later.... Appropriately, given her name, she wrote mainly partheneia (choral songs for maidens). Christianity too had her own Corinna, a Syrian martyr of the second century CE.

The seventeenth century lyric poet Robert Herrick, whose engagement with Ovid’s poetry is pervasive, called one of his fictional mistresses Corinna in his lyric collection Hesperides (1648). One of his most famous poems is Corinna’s going a Maying: a dramatic monologue where the speaking I tries to persuade his mistress to get out of bed and join in spring festivities. The most famous Corinna of the modern era is without doubt the female protagonist of Madame De Stäel’s novel Corinne or Italy, published in French in 1806 and quickly translated into many European languages. (The illustration shows Madame De Stael posing as Corinne.)  Stäel’s Corinna soon became the cultural touchstone for the nineteenth-century imagination of female genius, literary creativity and a ‘free’ artistic life, repaid by social marginalization and, eventually, personal tragedy. It is not by chance that Maggie Tulliver, in George Eliot’s The Mill on the Floss, refuses to read Corinne, lent to her by Philip Wakem, to the end, because she foresees the tragic defeat of this dark-haired heroine by a blond woman (Maggie was herself a brunette, whereas Lucy, her cousin, was a blond beauty).  Predictably, in nineteenth-century France the name Corinne enjoyed a large success (if mainly within the upper classes), thus becoming for the first time in its history a name widely given to non-fictional characters.  In the Anglophone world too, particularly the USA, Corinnas of flesh and blood are now not rare either. 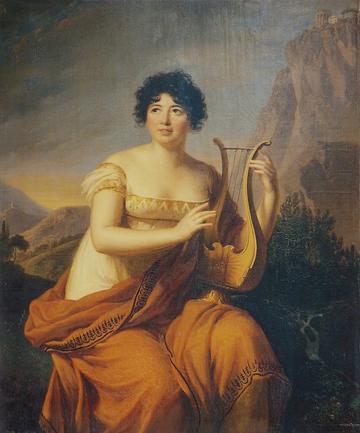