Kassandra (in the more familiar Latin form Cassandra) was, famously, the Trojan girl to whom Apollo granted prophetic powers in exchange for a promise of sexual favours; she reneged on her promise, and was condemned never to be believed.  In Aeschylus’ Agamemnon, as spear-won concubine of Agamemnon, she prophesies her own death, at the hands of Agamemnon’s vengeful wife Clytaemnestra, in one of the most chilling scenes in all literature.  Like most names of heroes and heroines of myth, hers was not borne by ordinary mortals until quite late in antiquity; the Lexicon of Greek Personal Names knows just 18 examples, almost all from northern Greece, and all dating from the common era or not long before.  A masculine form Kassandros was more popular (111 instances, 56 of them from Macedonia).  The most famous Kassandros (d. 297 BCE) was one of the generals who struggled for power after the death of Alexander the Great, and was eventually able to proclaim himself ‘king of the Macedonians’.  It was certainly his prestige that made the name modestly popular, and may even, rather than the mythical prophetess, lie behind the 18 historical Kassandras.  He was not just the most famous Kassandros but also the first securely datable bearer of the name.  Did his father Antipater, a Macedonian of high status, calque the masculine name from that of the Trojan seer?  An inscription set up in Antipater’s lifetime shows that there was at least one Greek family claiming to be descended ‘in thirty generations’ from Trojan Kassandra (mysteriously: no relevant offspring of Kassandra are otherwise known); but that family was on the island of Zakynthos, so not obviously relevant to Macedon.  More probably Kassandros was just a traditional Macedonian name, with no direct connection to the seer Kassandra.

The popularity in the Middle Ages of tales of the Trojan war, and sympathy with the Trojan side, brought the name Cassandra into favour in the 13th and 14th centuries; it never fell completely out of use, and has recovered considerable popularity of late (as a google search of Cassandra, images, graphically reveals).  Probably the best known modern Cassandra is Jane Austen’s much-loved elder sister, the one who frustrated our curiosity by burning all her more intimate letters after the novelist’s death.  The name was not plucked from antiquity by the girls’ learned clerical father; it was in fact their mother’s name, traditional in her family since at least 1690, and given new lustre by the marriage of one of these Cassandras to Handel’s patron the first Duke of Chandos.  It may seem odd that Christian parents should give their children the name of a pagan seer whose life ended tragically.  But names from myth can escape the associations of their mythological bearers: there are, Mumsnet assures me, Jocastas alive today. 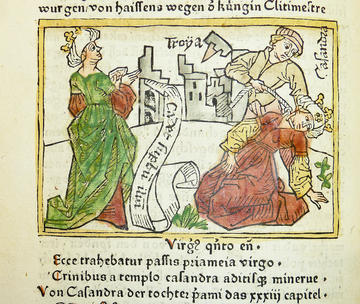